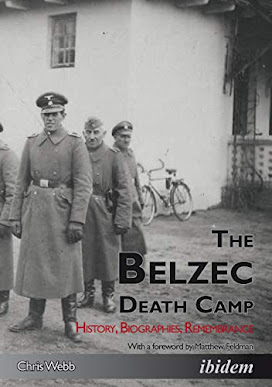 The Belzec Death Camp: History, Biographies, Remembrance by Chris Webb is the most recently written book about one of the least known of the three major camps constructed for Operation Reinhardt, the mass murder of the Jews of Poland.

The camp was “primitive” by the standards of what came later; in many ways, it was an experiment in stationary mass murder.  Before this time, more than a million Soviet Jews had been murdered by mobile SS execution units.  The Reinhardt camps, Sobibor, Belzec, and Treblinka, were meant to use the least resources possible to murder the most Jews, while exposing only a small number of Germans to a personal connection with murder.

Despite its prototype nature, Webb explains how Belzec was employed with brutal efficient.  In about ten months of operation, more than half a million or more Jews were killed, along with Roma and Sini peoples.  This comes out to about ten percent of all victims of the Shoah – all these killings, burials, cremations, sorting of goods, was done on a piece of land of about than sixteen acres.  Only one-hundred Ukrainian guards supervised by a little more than twenty German staff murdered half a million people on a small plot of land.  Webb explains that the camp was designed to kill and only kill.  We know of only seven survivors of Belzec.

Webb also shows us how Belzec’s ultimate fate was what the Nazis wished for all the murdered Jews of Europe. Bodies were cremated, bones crushed, ashes buried,  buildings dismantled, the Jewish workers killed, and trees were planted.  A “farm” was built on the site; Belzec was designed to kill Jews and then to be forgotten.  Ultimately, had the war turned out differently, this would have been the fate of all the camps - and of Europe's Jews.

Posted by The Right to Write at 5:07 PM No comments:

Our Magnificent Bastard Tongue: The Untold History of English 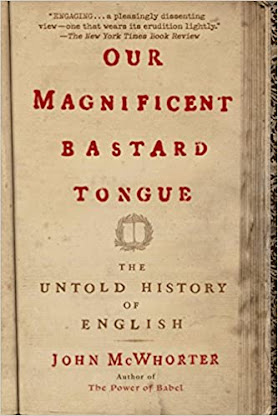 Our Magnificent Bastard Tongue: The Untold History of English, by John McWhorter, chronicles the history (of the changes) to the English language.  McWhorter takes on the on the perennial mystery of why Anglo-Saxon (Old English) so seemingly Germanic, evolved into Middle English (Chaucer) the earliest form of our modern language.  For us, the latter is incomprehensible, while the former, although a challenge, is modern English.

McWhorter has many theories, some of which cancel each other out.  All involve the influence of other languages and their speakers on Anglo-Saxon.  Old Norse, Celtic, and the usual suspect Norman French, with its wealth of Greek and Latin loan words, contributed.  But for McWhorter, the Old Norse and Celtic influence did the most to “simplify” English.

But really, McWhorter finally tells us, the “simplicity” of modern English’s foundation was laid long ago in Proto-Germanic, the penultimate language before Proto-Indo European.  Our paucity of cases, neutered nouns, and lack of key inflections, is a seed within the bud of German itself.

Probably it is best to think of this book not as a Grand Theory of the evolution of English, but a series of chatty theories.
Posted by The Right to Write at 9:36 AM No comments: 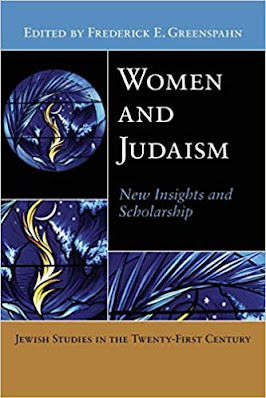 Women and Judaism, edited by Frederick E. Greensphan, is the fifth volume of the Jewish Studies in the 21st century series.  This book examines one of the major developments in contemporary Judaism – the entry of women as fully equal partners with men in Jewish communal, religious, and academic life.  Judaism, as a patriarchal religion, has traditionally confined women to narrow roles – silencing fifty percent of Jews.  This book deftly explores the revolutionary impact of women on all areas of Jewish existence. 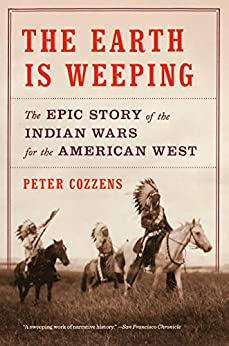 Afghanistan was not America’s longest war, it was the United States' ongoing battles with Native American’s, particularly after the Civil War.  The US government’s war with the western tribes, from the end of the Civil War until the 1890s, was the time and place of our most protracted armed struggles.

The Earth Is Weeping: The Epic Story of the Indian Wars for the American West by Peter Cozzen does a generally useful job explaining the conflicts.  Both the tribes and the government are painted in shades of gray. I can’t help but think the suffering of the Indians are not highlighted nearly enough here – after all they were on the losing end of a multigenerational genocidal campaign.  Still, to paint them as passive victims would be wrong as well.  They were (and are) human beings with complex motivations.

Posted by The Right to Write at 1:25 PM No comments: 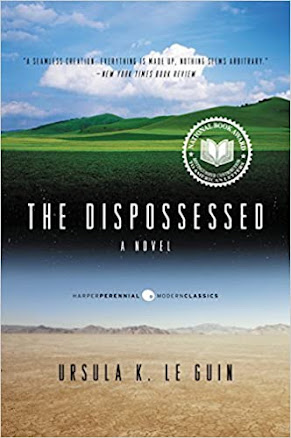 The Dispossessed by Ursula K. Le Guin is as flawless a novel as they come, and has been correctly heralded as her masterpiece.  Le Guin is not fixated on the gadgets of science fiction - but uses the genre to explore what it is the be a human being – and the social structures we create to exist.  This novel also features Shevek, a theoretical physicists who is one of the most fully realized characters in fiction.  He is the perfect embodiment to explore Le Guin’s world.  This novel was a privilege to read. 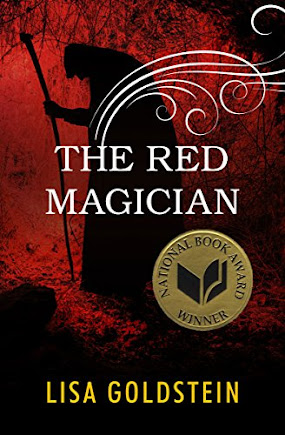 I find it hard to believe that anyone could find anything redeeming about The Red Magician by Lisa Goldstein.  Yes, this is a novel for children, but that makes it all the more shameful that this book is out there as an example of Holocaust literature.

There are inconsistent messages here; the community is warned to leave, but most do not.  There is a sense of blame for their naivete.  But really, where did they have to go?  The struggle between the Red Magician and the Rabbi also fails to make sense.  The Rabbi wants to blame the Red Magician for the death of his daughter, when really, the blame rests with the German murders and their collaborators.

This is story that is confused about its own fundamentals.  At times, it reads like the outline for some more fully imagined work that does not exist. 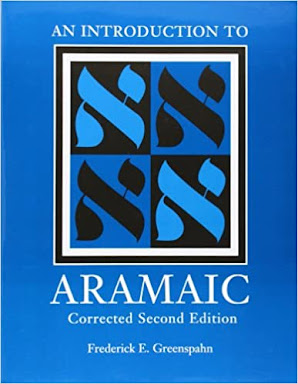 An Introduction to Aramaic, Second Edition (Resources for Biblical Study) 2nd Edition, by Frederick E. Greenspahn is a lean and informative book about (mostly) Biblical Aramaic.  You will be reading the book of Daniel for about three fourths of this work.  Toward the end Greenspahn turns to some other interesting examples of Aramaic use outside the bible: the Jewish community/garrison on the island of Elephantine in Egypt, the Dead Sea Scrolls, and letters and texts from the Cairo Geniza.

I have never read such a clear exposition of Aramaic before.  This book is an excellent place to start learning to read the language, or brushing up on skills you already possess.  You will need an excellent comprehension of Biblical Hebrew to understand this work.

Posted by The Right to Write at 8:32 AM No comments:

The Right to Write
Writer of fiction and non-fiction. I love hearing from readers. Please feel free to comment.